The essential orderliness of English orthography

The English spelling system has continuously evolved alongside, and in organic interaction with, the development of the language itself.

No one person or institution invented specifically English spelling and it is a fundamental error to talk of the spelling system having been ‘designed’.

That being so we should approach any spelling with the assumption that there is a reason for it even though, for the moment or even for some time to come, we do not know or cannot yet determine that reason.

One of the many detrimental consequences of the phonics fallacy is that the many spellings that its tunnel-visioned ideology cannot account for are classed as ‘exceptions’ or, even more absurdly, as ‘tricky’.

Calling a spelling that one can not explain an ‘exception’ is simply intellectual resignation.

Faced with a spelling that we cannot (yet) explain, real spellers:

To adapt the famous opening of John Donne’s Sermon, no word is an island entire and of itself. What is true of the reason or reasons for one word’s spelling could well be true for hundreds of others. And this is the case even with apparently simple and basic words.

So, for example, once you understand the reason for the doubled < gg > in < egg > you can not only account for the spellings of such words as < inn >, < odd > and < butt > but you also consolidate and extend your understanding of the relative orthographic conventions that apply to lexical and function words.

The term ‘justification’ has the denotation “show or prove to be right”. In the context of orthography it refers to the ability to explain and account for every part, and every letter, of a given spelling. Here is one diagrammatic summary of the criteria that govern orthographic justification. 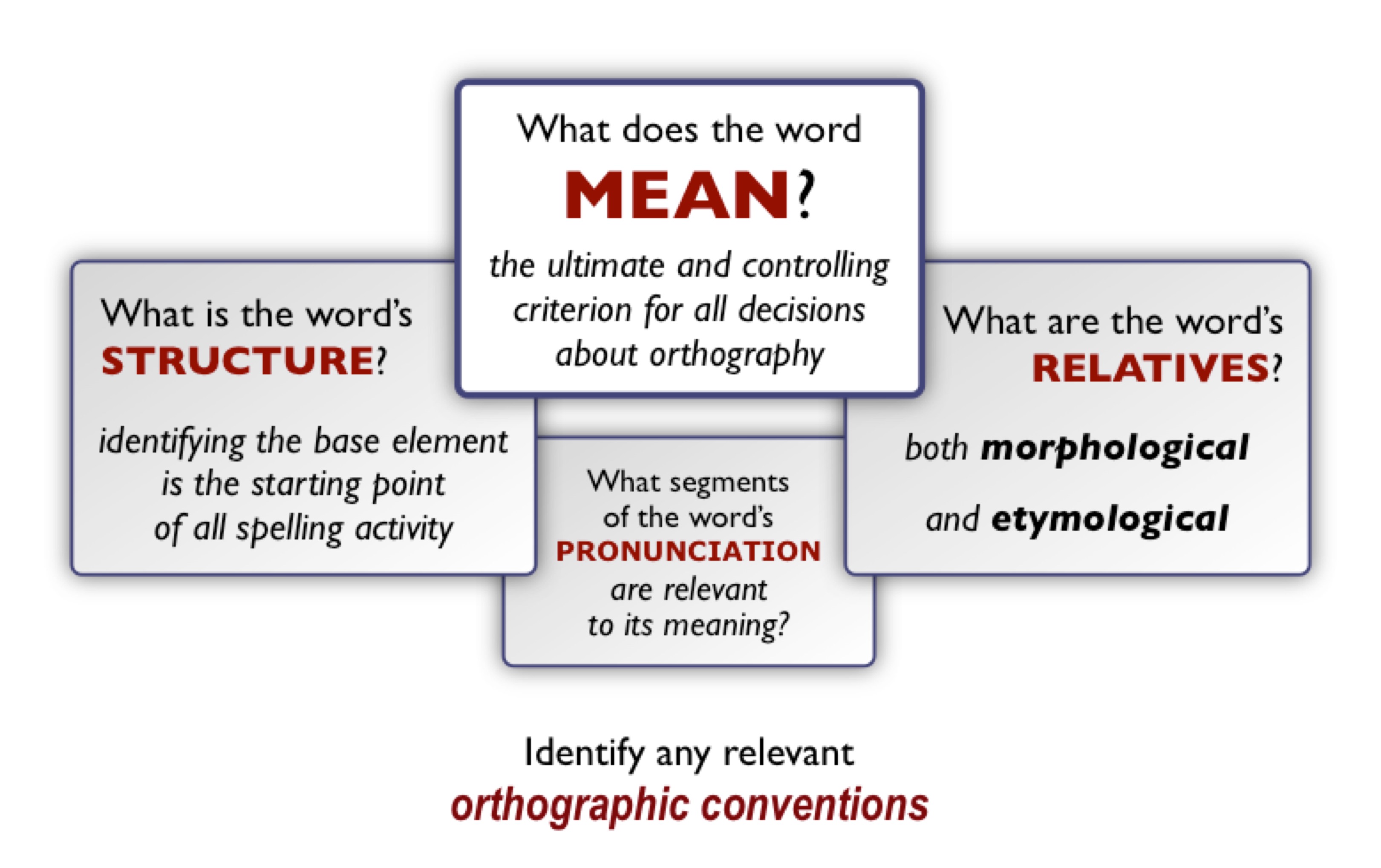 The framework of the orthographic conceptual map

The structure of your investigations must be firmly based on, and correspond with, the conceptual map of orthography, the integrated interrelationship between morphology, etymology and phonology. Click on the golden ball for a reminder of this conceptual map.

The importance of the properly focused question

The free base element of < question > is the noun < quest >. The orthographic quest is an informed and disciplined search for reasons, not the generation of ruses and mnemonics for ‘remembering’ individual spellings.

The fully informed focused question posed with rigorous precision contains the seeds of its own answer.

In the main part of this Theme we shall see this principle in action as we work towards the justification of the spelling of < love >.

NOTE: Many of these Themes contains special characters for IPA, Old English, or other languages. Not every browser/system supports these: you may see question marks, boxes, or other symbols. You can be sure that we tested them on our computers and they worked there, but if they don't render properly on yours, here are some things you can try.

This is a link to a discussion